During my first trip north of the border in a decade and a half, my mother and I were forced to dodge the welcoming committee of smack-heads, unruly children and devil-like grannies: out on their weekly hunt for eggs and haggis. 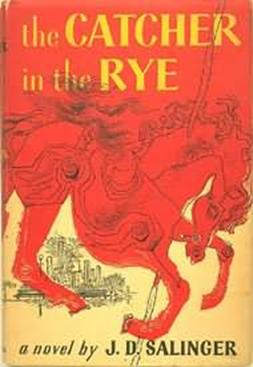 We took shelter in a random, over-priced and shabby looking charity shop. I spotted the legendary J.D Salinger novel ‘The Catcher in the Rye’. And despite knowing precisely nothing about either the author or its content, I flicked open the first page to see what all the fuss was about.

Within the first few lines, words screamed out at me like: ‘lousy, crap, hemorrhages and goddamn’! I had no idea what I was expecting but it certainly wasn’t as hard-hitting as this. I’d imagined classic, boring, random-nonsensical stuff I’ll probably never learn to appreciate. But this was different for sure. I mean it was really different.

I had a bond with the book just from the title alone. My school was in a quaint little town called Rye (in East Sussex). I was actually at school with Paul McCartney’s son and my older bro James was in the same year as Stella too (she works in a clothing factory in China now I believe).

Anyways, so I bought ‘The Catcher in the Rye’ for £2.50 or so from this crumby bookstore. I’m so glad I did. Really I am. Seriously if people had told me when I was younger that there are swear words in books, I’d probably have read much more. I mean, much much more. Unfortunately, I read very little as a youff.

The book’s loosely about an unruly teenage boy, Master Holden Caufield, who gets in to all sorts of pickles. He gets expelled from school. He feels lost and bewildered, although never ceases to look out for his little sister. Ever the big brother, he ponders on life’s next direction; most importantly, however, the boyish style it’s penned in is utterly gripping.

I’m sure there are lots of other subplots such as alienation, finding your purposes in life and more subconscious ones I’m missing - but I thoroughly enjoyed reading it all the same. I just can’t explain how well it’s written. It really is. It’s like a kid you went to school with wrote it. You’ll be really glad you read if you haven’t already. If you have, you should read it again anyway.

Originally published in 1951, the title spans from a Robert Burns lyric ‘if a body meet a body coming through the Rye’; I learn as I stumble across a Burns biography in his homeland of Dumfries, Scotland.

Salinger swears like a Scotsman in it too, as Holden observantly and poetically puts it: “If you had a million years to do it in, you couldn’t rub out even half the fuck you signs in the world!”

But more to the point, for me anyway, my bro and I went to school in Rye, and no catcher ever caught us there. I did break my leg there once (sort of) but that’s another story...

To Hear Or Not To Here Pete Tong Kighted MBE