Back from the Bay of Bengal

After another immensely emotional week, there appears to be a little light at the end of this long dark tunnel. Generally I always have so many things to say, but sometimes I struggle to write anything at all. Not wanting to bore whoever bothers to read this crap with the trials and tribulations of a journalist's hectic life in India.

This is my last week working for the Madurai Messenger as their 'star' (ahem) reporter. From here I'll set off on a new adventure, in a new direction, heading for a new destination. The who, the how, the where and the what, and possibly the why are all still to be confirmed. I'm awaiting some divine intervention as always it appears.

In the meantime, I'll continue trying to break my body in half at 6 am yoga class, read more of

The Buddha Walks into a Bar and keep chasing that everlasting dream of inner-peace… I am sure I'll find it one day. 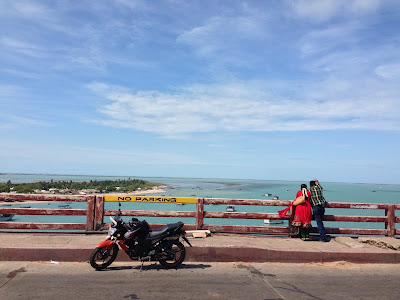 Last week we went to the most beautiful corner of the world, Dhanoushkodi - India's southern-most point, or it's closest point to Sri Lanka anyway. We walked down through the gost town (completely abandonned since the 1964 cyclone devasttaed the entire area) to the beach where the Bay of Bengal meets the Indian Ocean. It felt like you could almost see the seas meeting and crushing together but I'll try to pen an article on it and update the blog with more interesting bits later.

Instead, for now, I'll leave you with this pic.