10 Years of Raving in Peace

Well, this is another weird one to write in all honestly. A blog to commemorate the passing of a larger the life, and legendary, big brother James.

Ten years ago to the day, I received a call in Egypt that changed my world forever. My father called me with the tragic news that – whilst banged up for stealing a gingerbread man during the London Riots of 2011 – my brother had died.

Frantic, confused, imagining a hugely violent death at the hands of raging inmates stomping on his head – I was relieved to learn it was natural causes. What followed was an outer-worldly feeling of not wanting to be there (to fly back to the UK from Egypt), not wanting to believe, not wanting to attend his funeral in the hope none of it was really real.

The funeral went well I guess, the early wake had less tears and some smiles and laughs and happy memories. The afterparty send-off will go down in local Hastings folklore as one of the best wakes the area has ever known. Old skool rave duo the Ratpack kindly agreed to head down from London town to play a small little farewell party. All their tunes, and lyrics mentioned James, me and the Hastings crew. It was magical.

Despite an obvious lack of acid and mushrooms, by the end of the night our cheeks were aching we’d smiled so much. It was the send-off of all send-offs and he would have been gutted to have missed it.

Heading back to Egypt in a fragile state, I tried – and failed – to keep my career on track. 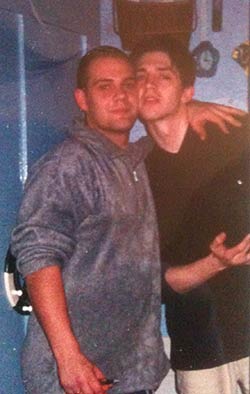 Through years of court battles, trying to find out exactly why he laid there dying without an ambulance attending for an hour or so, or why he was in a gym unsupervised when he was in no fit state to be there, or why the prison guards didn’t believe him as he took his last breaths was some pretty tough shit to listen to. Crying in courtrooms full of strangers became too frequent.

Naturally, if you try to beat the system – be it police, the prison system, the political system – in almost every country in the world you’re doomed to fail. And fail we did. For my second appearance in the High Court in London, I confirmed my 100% failure rate at securing a positive outcome (the first when we failed to get me into a mixed school in my hometown). Questions went unanswered by faceless prison guards protecting their own as should have been expected.

We did (my mother and I) manage to change the guidelines on emergency calls to the ambulance service from prisons that said. A Rule 43 court order was passed instructing ambulances to be sent immediately (on blue lights / high priority) to prisons – unlike in my brother’s case where two vehicles were cancelled en route to him as he died – so we would like to think that's helped.

Having visited HMP Wandsworth and having walked in my brother’s shadow, having heard the ruckus, seen the fights, felt the anger and energy in those places, it really wouldn’t surprise me if guidelines get no further than newspaper headlines.

Would I be where I am today without him? Undoubtedly not. Would I be here today if he hadn’t passed too early? Perhaps – but under quite different circumstances.

Trying to clear an immensely clouded head, I headed for some sort of spiritual journey – taking me to India to volunteer. From there I ended up in China teaching English, before conquering the nightlife and events scene in Beijing.

August Music Reviews Riders of the Storm in Kyrgyzstan